The first week of 2018 brought extremely cold arctic air to the Eastern states, with temperatures as much as 20-25 degrees below normal as far south as Georgia and Florida. A powerful and rapidly intensifying nor’easter - which many called a Bomb Cyclone (nickname for Bombogenesis) – moved up the Eastern Seaboard.

Bombogenesis is a meteorological term defined by the National Weather Service as rapid intensification of a cyclone (low pressure system) with a surface pressure expected to fall by at least 24 millibars in a 24 hour period. 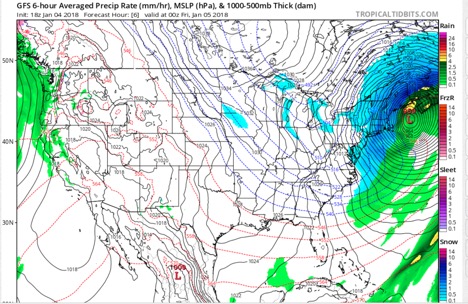 Bomb Cyclone was a big hype story the first week of 2018, with a strong nor’easter moving up the East Coast that first brought snow and ice to Florida and Georgia. Brrr. And over a foot of snow across parts of the Eastern Seaboard.