Posted in: Kari's Korner
By Kari Strenfel
1 comment
More from this author

California’s 2020 historic fire season has begun after an August lightning storm abruptly awakened the San Francisco Bay Area early on Sunday, August 16th. The thunderstorm activity fed by moisture pushed northward from Tropical Storm Fausto, which followed three days of extreme heat, sparked fires throughout Northern California through the 16th and 17th. With the hot and dry vegetation (or fuels), over 360 fires were started during this event. Three fires have already made it into California’s top ten largest fires, the SCU and LNU Lightning Complexes currently at second and third, respectively.

Check the status of all the current fires (location, percent contained, acres burned, structures destroyed) by visiting CalFire’s Map. The handy interactive tool gives you access to all the tools you need to keep an eye on fire progression this fire season.

For the August weather recap, it feels fitting to share exactly what my AcuRite Atlas™ home weather station with lightning detection reported during this rare thunderstorm and lightning weather event that we experienced that early Sunday morning. The smell and sound of rain through my open windows allowed us to fall back asleep, thinking if there’s any lightning, good thing it’s raining. Well, some rainfall here doesn’t mean it’s raining exactly where the lightning struck. And it wasn’t much rain – scattered showers associated with thunderstorm development.

My lightning sensor reported 28 lightning strikes on the 16th; the closest was 1 mile away at 8:53 am. By this time, the whole family was awake and enjoying the, again, rare thunderstorm activity and bursts of heavy rainfall. With a bit of hesitation, as we went out puddle jumping during a break in the showers, we saw the first sign of smoke on the hills. Unfortunately, it was all starting to burn. Rainfall totals reported by my Atlas measured only 0.18 inches, not nearly enough to combat any potential fire starts. 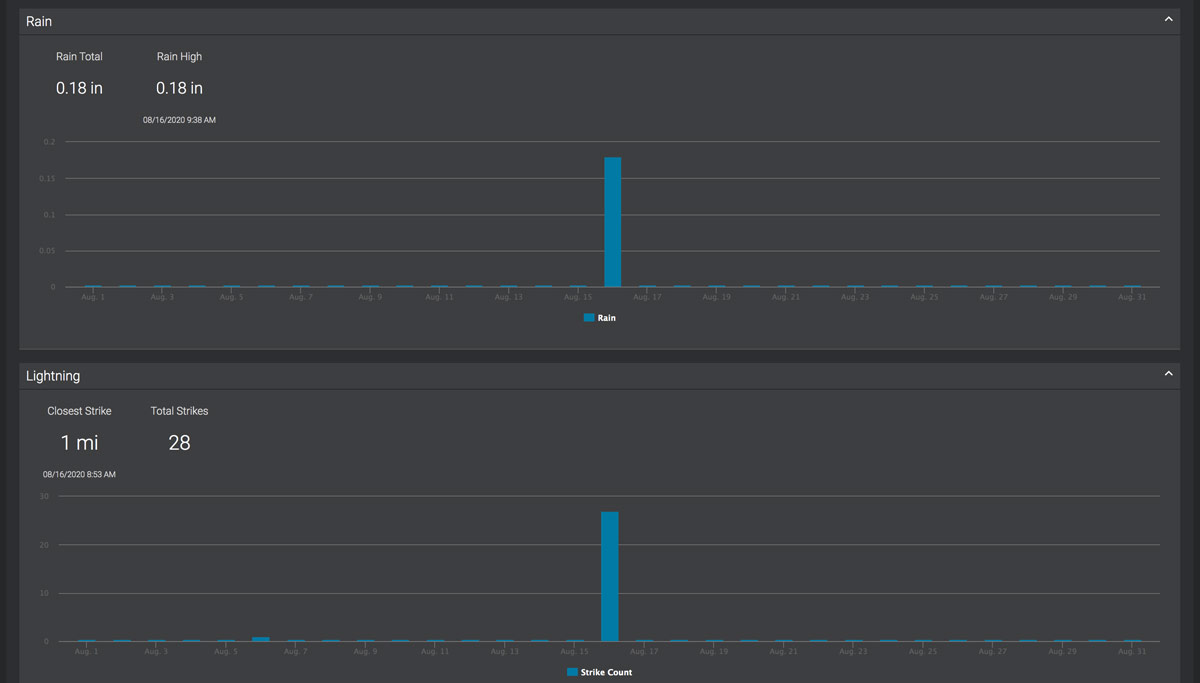 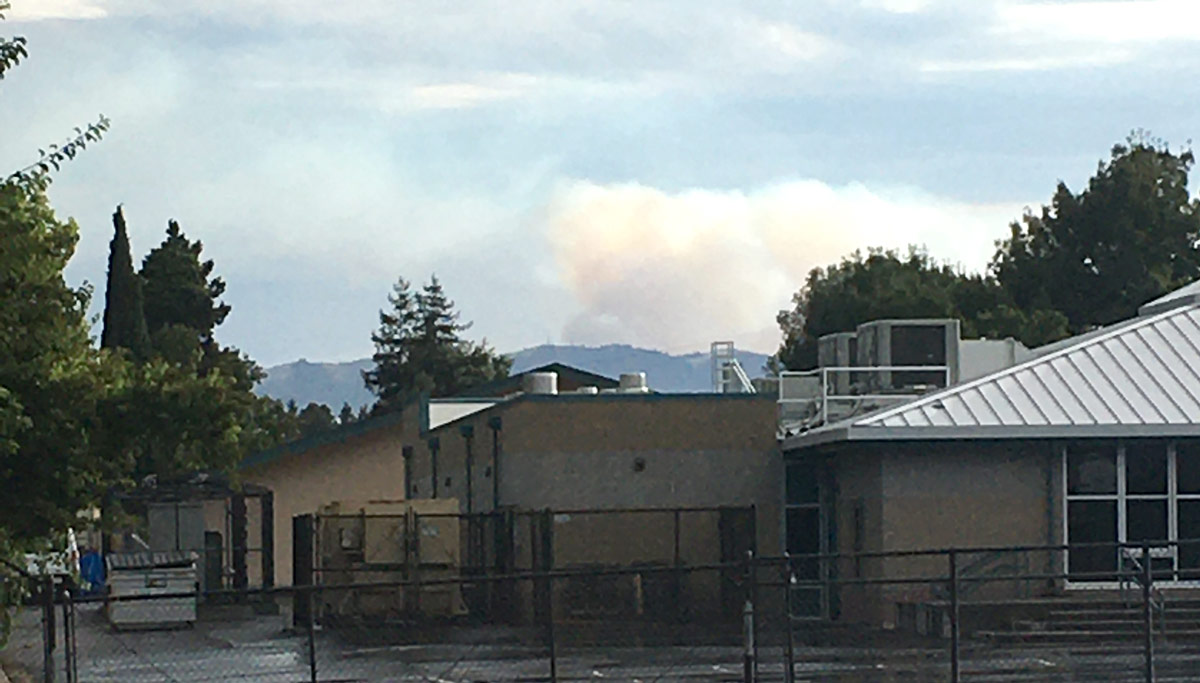 The heat-wave continued after the thunderstorm activity. From August 13th to August 19th, my AcuRite Atlas™ reported above 100-degree F temperatures, with the hottest day reaching 109.1 F on August 14th.  With these hot temperatures, fire management and the attempt to contain the fire or reduce fire spread is nearly impossible as the vegetation is what they call “preheated,” allowing for more rapid ignition. 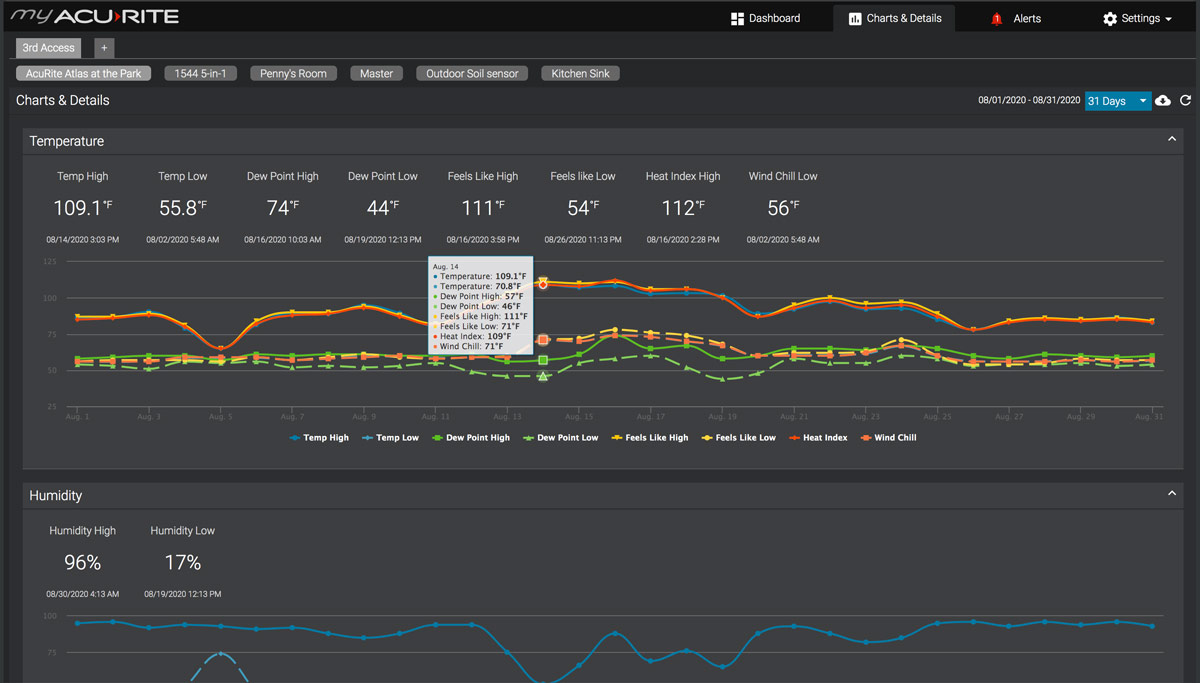 With fire season usually running from August until the first rainfall (sometimes not until November), this may be just the beginning of a horrific California fire season. Also, remember, the Santa Ana winds in Southern California don’t peak until October when we see the traditional fire risk increase as it brings in dry, hot desert air from the east. In Northern California, we also see this pattern but called the Diablo wind events. Remember, it’s never too late to brush up on ways to prepare yourself and your home for fire season to reduce your risk.

Do you recall the Camp Fire in 2018 that ravaged Paradise, CA? Learn how this group Rebuilds in Paradise with AcuRite weather tools. Meanwhile, back East, learn how the Flametamers Wildland Fire Crew in Philadelphia prepares for fire season with an AcuRite weather station for their mobile command center and an AcuRite Atlas™ installed at the fire department.