Moonstruck: The lunar cycle's effects on hunting and fishing

Successful hunters and anglers know that feeding time—the hours around sunrise and sunset—give you more action. And experienced anglers and hunters know the secret to bringing home trophies instead of stories lies in knowing the specific monthly phases of the moon.

>John Alden Knight, an avid fisherman and the author of Moon Up...Moon Down, The Modern Angler: Including the Solunar Theory, and The Theory and Technique of Fresh Water Angling, is widely credited with the development of the solunar theory. 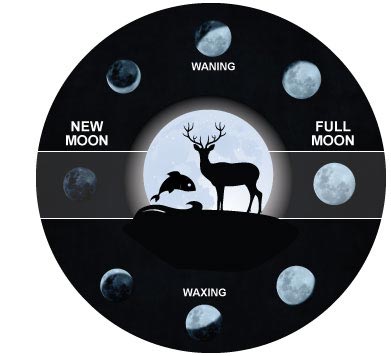 Knight’s theory validated local folklore that animals and fish move according to the location of the moon, not the sun. The theory says the best time to fish or hunt is when the moon is directly overhead in the sky or directly underfoot in the opposite side of the earth’s sky. These two positions are referred to as major activity periods. Two other daily periods of lunar influence — halfway between the overhead and underfoot positions — are called minor activity periods.

Putting the folklore to the test, Knight compared some 200 record fish catches with the corresponding phase of the moon. The vast majority of those record catches (90%) were made during a new moon when solunar effects appear the strongest.

The best time to fish is when a solunar period falls within 30 minutes to an hour of sunrise or sunset. The intensity of the action changes with the changing phases of the moon. So, when those major periods of activity occur during a new or full moon, you bring home trophies.

Hunters should take note that Knight’s theory works on animals, too. While his early work focused primarily on changes in fish behavior, Knight determined that animals and game birds also display increased levels of activity during solunar periods.

Because changes in the  moon aren't always visible, it can be difficult to identify its positioning throughout the lunar cycle. AcuRite Weather Stations track the phases of the moon conveyed through simple lunar phase icons.

So go ahead. Plan your next hunting or fishing trip with confidence!