6 Safety Tips To Remember When Driving in Fog

Posted in: Why Weather Matters
By AcuRite Team
No comments
More from this author

6 Safety Tips To Remember When Driving in Fog

Fog is among the most enchanting of all weather phenomena. Whether it’s tendrils of mist rising from a lake’s surface or a blanket of cloud settling into a low-lying valley, fog gives everything a mystical, magical, eerie feeling. Unfortunately, fog can be as dangerous as it is beautiful.

According to the Federal Highway Administration, fog is a factor in more than 25,000 accidents and nearly 500 deaths annually. It’s enough of a hazard that the National Weather Service devotes a page to advice about driving in foggy conditions. Here’s what you should know about fog and what you should do if you have to drive in it.

Fog is essentially a cloud that develops at ground level and reduces visibility to less than five-eighths of a mile (1 km). There are several different types of fog, each of them developing under specific but similar conditions. The common factor is — just like with any other cloud formation — condensation of water in the air.

For fog to form, the air must be humid, and there must be dust, pollution, or other particles in the air for water to condense around and form tiny water droplets. Generally, fog forms overnight when the temperature and the dew point are equal. It usually dissipates shortly after sunrise as the sun warms the air and the ground.

Radiation fog — commonly called ground fog — is common in inland areas where the temperature drops significantly after dark. It forms when the ground releases the heat it has absorbed during the day, warming the cooler air.

Advection fog forms when warm, moist air passes over a cool surface. It’s particularly common in coastal regions where tropical air meets ocean water, such as along the Pacific Coast of the U.S.

Freezing fog forms when the surface temperature is at or below freezing — 32 °F (0 °C). When the moisture from the fog reaches the road, sidewalk, trees, or other surfaces, it freezes instantly, often forming black ice. 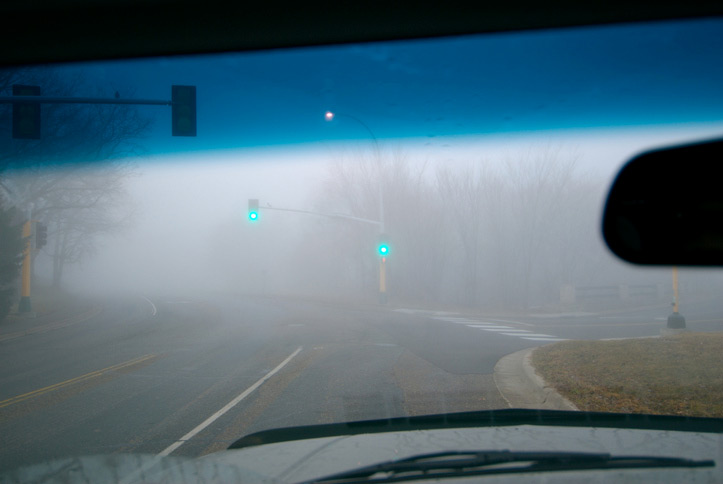 6 Tips for Driving in Fog

Like driving in sleet, hail, or heavy rain, there are steps you can take to stay safe when driving in foggy weather. The first tip is, of course, if it’s at all possible, avoid driving in fog. Since fog typically burns off shortly after sunrise, if you can postpone hitting the road for an hour or so, you can avoid it altogether. This isn’t always possible — and since thick fogs can roll in out of nowhere and blanket an area within minutes, you could find yourself caught in a thick fog unexpectedly. If that happens, these steps can keep you safer:

If there’s no safe place to turn off the road, pull your vehicle as far off to the side of the road as you can. Turn off all your lights except your emergency flashers. Set the emergency brake and keep your foot off the brake so that other drivers don’t mistakenly think you are driving. Stay in your vehicle. Remember, if you can’t see 2 feet in front of you, other drivers certainly won't be able to see you.

Be Prepared for Driving in Fog

While weather reports and NWS alerts can give you a heads up about foggy conditions, a personal weather station, like one from the AcuRite Olympus Series®, will give you more accurate data for your exact location. You can track changing weather conditions, such as increased wind speeds and daytime heating, that presage improved fog conditions much sooner than the weather reports. Plus, a home weather station can help you stay informed of the temperature, humidity and wind speed and direction to help plan your daily commute and other trips with weather safety in mind.