The Comfort Equation: Air Density and Your Heater

Posted in: Why Weather Matters
By AcuRite Team
More from this author

The Comfort Equation: Air Density and Your Heater

Temperature, pressure, and humidity changes not only affect the weather we experience, but also the conditions inside our homes. Modern buildings depend on heating, ventilation, and air conditioning systems to keep us comfortable, but did you know these systems can be impacted by changing pressure and air density?

In this article, we’ll explore the impact air density and pressure have on our daily lives, how to understand and predict air density, and how to use it as a tool in choosing maximum comfort and heater efficiency during the cold season.

How Does Air Density Influence Our World? 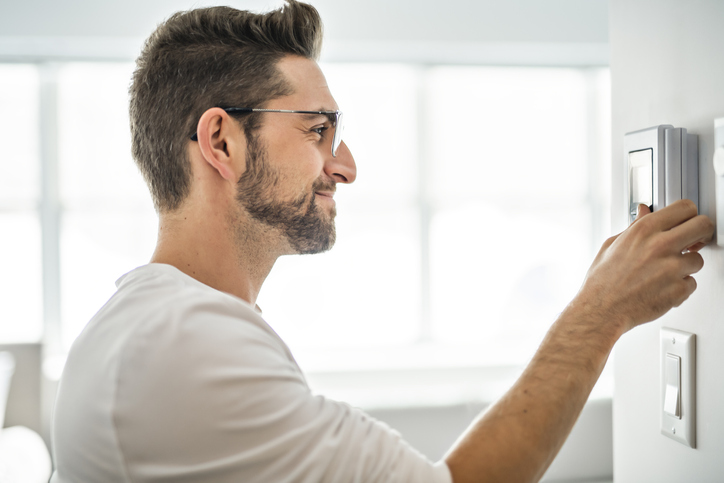 In addition to the examples above, we most commonly experience the impact of air density at home, as it can have a large impact on the effectiveness of your HVAC system. This is because outdoor air is continually seeping into even the best-insulated homes, causing pressure, temperature, humidity, and air density to change constantly.

Maximum heater stress comes when the pressure is rising and the temperature is falling (after a strong cold front, for example), as your heater will turn up the fires when air density increases the most. If the temperature is rising and the pressure is falling, the air density is decreasing at its greatest rate and a storm (or at least unsettled weather) is probably coming. Your heater will get an easier ride as air density drops.

How Does Heating Affect Air Density and Pressure?

Air pressure will typically be higher inside your home when the heater is running. The fan creates a pushing force on the air that increases the pressure within the walls of your home. Heating also dries the air, and because dry air is heavier than moist air, the drying process adds to pressure-increasing effects. While the increased temperature will offset some of the pressure change, the increased pressure and density can lead to discomfort in your home, including causing headaches and other joint pain.

The air coming out of the heater is typically much warmer than air in the rest of the room, but it quickly cools as it disperses through the grates into the home. This means the air density of the flow inside the vents is lower (hotter) than air in the room. So the air rises when it first leaves the vents, then cools and falls (it gets denser) after a short time. This phenomenon is one reason some homes can be drafty — so open or close vents to help control this.

When dry air passes through your heating system, the relative humidity drops even more — creating a low-density environment. Drier, heated air can make for chapped lips and cracked skin, so the comfort level tends to be highest in the winter when the outside air is moist. You can learn more about how humidity affects the comfort of your home here!

Gusty winds are no friend of home heating systems. The home’s side facing the wind reaches a higher air density as the air “piles up,” allowing more air to force its way into the house. Cold air seeps through doors, windows, and ceiling cracks and the inside pressure increases on such days. So when it is gusty and cold, outside pressure becomes a more significant factor in heater efficiency. Windy conditions will affect rooms on the house’s windward side the most, so you may want to close vents on the downwind (warmer) side of the home and redirect airflow to the colder rooms on these days.

Measuring the temperature and pressure trends inside and outside with your home weather station will give you the most precise picture of changing air density and how to maintain optimum heating levels.

Air density impacts everything from the weather to air travel to something as simple as breathing. It certainly impacts the efficiency of your home HVAC system. It’s impractical and difficult to directly calculate air density daily, but you can enter the numbers from your home weather station into a simple online calculator. After a few tries, you’ll get a feel for the basic numbers and how each weather event impacts your particular system. This will help make your winter more comfortable and perhaps less expensive. Stay warm!