Everything You Should Know About Groundhog Day

Everything You Should Know About Groundhog Day

For many people, Groundhog Day seems like something from a Bill Murray movie, but in fact, Groundhog Day is a real holiday in the U.S. So, what exactly is Groundhog Day and what is the meaning behind it? Let’s take a look!

What Is Groundhog Day?

Happy Groundhog Day! Groundhog Day is an annual tradition to predict the end of winter and the start of spring, mostly celebrated in the U.S. Northeast, and specifically in the town of Punxsutawney, Pennsylvania.

Tradition is, if the groundhog sees his shadow, there will be six more weeks of winter. If there is no shadow, then spring is on the way.

When Is Groundhog Day?

Whether it falls on a weekend or weekday, Groundhog day is on February 2nd of every year! Celebrated in Punxsutawney, PA, folks gather to watch for the groundhog shadow, usually as a glimpse of hope for an early spring for those bitter Northeastern winters. So how did this Groundhog Day thing get started?

How Did Groundhog Day Start?

The meaning of Groundhog Day is actually derived from a holiday the German settlers brought in the 1700s called Candleman’s Day.

Candleman’s Day: In the dark of winter, clergy would bless candles and distribute them to people to place in every window of their homes. If the sun came out on February 2nd, halfway between Winter Solstice and Spring Equinox, it meant six more weeks of wintry weather. Eventually this evolved into watching a badger to cast a shadow.

The Delaware Indians settled Punxsutawney, Pennsylvania in 1723 and they considered groundhogs honorable ancestors following the Indian legend of their ancestral grandfather “Wojak, the groundhog.”

When the German settlers came they combined their traditional Candleman’s Day and the natives’ love for the groundhog, and hence the tradition became to watch the groundhog shadow every winter!

The earliest reference to Groundhog Day is from a diary entry from Berks County, Pennsylvania storekeeper James Morris on February 4, 1841: "Last Tuesday, the 2nd, was Candlemas day, the day on which, according to the Germans, the Groundhog peeps out of his winter quarters and if he sees his shadow he pops back for another six weeks nap, but if the day be cloudy he remains out, as the weather is to be moderate."

How Accurate Is Groundhog Day?

This annual groundhog tradition has continued since 1886, and according to data from the York Daily Record, there are only 10 instances of years without historical shadow-seeing data! Going back to 1886, and taking into account the 10 years of missing data, the groundhog has seen his shadow 106 times (forecasting a longer winter), while reporting no shadow 20 times (forecasting an early spring). Unfortunately, Punxsutawney Phil’s winter prediction is correct only about 39% of the time, making for a somewhat unreliable meteorologist — but it sure is a cute tradition!

Fun fact: Although they claim there is only one Punxsutawney Phil, groundhogs live roughly 10 years on average so there have been anywhere from 15 to 20 groundhogs used for Phil. 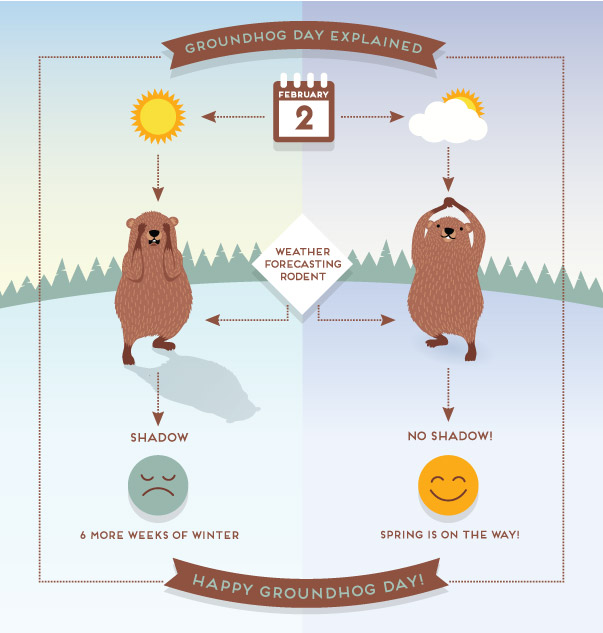 A tradition that has stood for many years is still fun for kids and families to take part in today. Watch the celebration for yourself on February 2nd to determine if the groundhog saw his shadow, or use your weather station to predict a groundhog shadow in your region.