Snow Squalls: A Look Into This Fierce Type of Winter Storm

Posted in: Weather 101 Why Weather Matters
by AcuRite Team
0 comments

Snow Squalls: A Look Into This Fierce Type of Winter Storm

During the winter, have you ever experienced a sudden drop in temperatures with gusty winds and white-out conditions? And then an hour later, the conditions are calm? You may have been caught in a very localized, small-scale weather phenomenon called a snow squall! Much like the localized warnings for thunderstorms and tornadoes, the National Weather Service provides warnings for these brief, intense winter storms.

Let’s take a look at what creates snow squalls, why they are dangerous, and how you can stay safe.

What Is a Snow Squall?

A snow squall is a fierce snowstorm producing high winds that moves rapidly. Blowing snow severely limits visibility and the localized and speedy onset of squalls makes them difficult to forecast, enhancing their danger. That is why the NWS issues “short-fused” warnings “focused on distinct areas,” much in the way they warn of tornadoes and other severe storms. While a snow squall can occur anywhere that experiences snow, they are most common in the Great Lakes region due to the lake effect on local conditions.

Difference Between Snow Squalls and Other Snowstorms

Squalls are shorter in duration and therefore usually produce less snow accumulation than other snowstorms. However, the intensity of squalls makes them highly dangerous due to the rate of snowfall accumulation, as squalls generally last anywhere from 30 to 60 minutes. In addition to strong wind and snow, a snow squall can even produce thundersnow.

How Does a Snow Squall Form?

In the winter, when cold air suddenly moves over areas with warmer surface temperatures — such as a lake effect snow event — this can create the specific mix of conditions that can initiate a snow squall. However, the isolation of these fronts means that there does not need to be any other active winter storm occurring in the area. A squall’s strong low-level convergence at the cold front can create high-velocity upward motion, which can allow for heavy snowfall, strong winds, and potentially thunder and lightning.

When Does It Occur?

Because they’re made when an Arctic cold front interacts with warmer air, snow squalls often happen in early and late winter, when local temperatures are still relatively high. However, warmer days at any point throughout the winter can experience snow squalls, which corresponds to their prevalence near the Great Lakes. 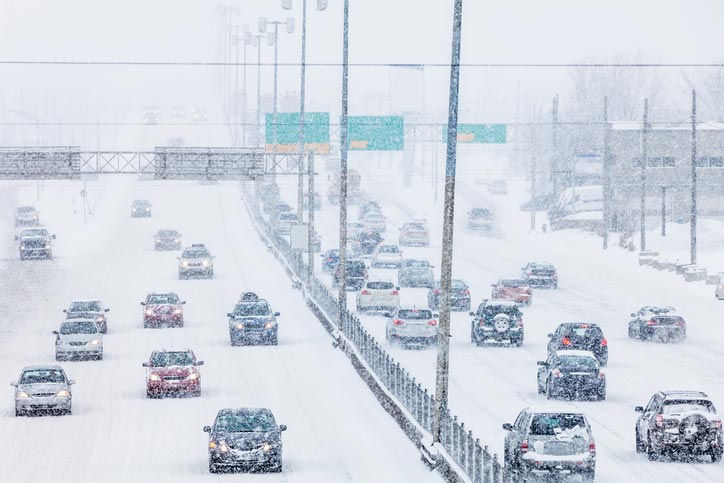 Drivers face the most pressing dangers from a snow squall. Given that larger snowstorms can last from hours to days at a time and are often more predictable in advance, drivers have the opportunity to prepare or avoid the roads altogether. Squalls, however, develop and move much more quickly. The gusty winds and intense snow can completely eliminate visibility. Additionally, the rapid accumulation of snow on the roads creates slick surfaces that drivers are less prepared for.

The combination of slippery roads and limited visibility creates imminent danger, which is why the NWS provides localized warnings and is working to further educate the public on snow squall risks.

Here are a few actions you can take to make sure you are prepared in the case of a snow squall.

Snow squalls are brief and intense winter storms that can create whiteout conditions and slick roads in what feels like an instant. While they are particularly dangerous for drivers due to their unpredictability, refreshing your winter weather awarenessand knowing the signs and risks can better prepare you this winter. A personal weather station will help keep you up to date on conditions before venturing out. It is also a great idea to keep a portable weather sensor in your vehicle so you can tune in to changing conditions like cold fronts with gusty winds. AcuRite weather tools can help you avoid the dangers of snow squalls before they happen.