Tornado Season: What You Need To Know To Stay Safe

Posted in: Weather 101
By Steve LaNore, Certified Broadcast Meteorologist
More from this author

Tornado Season: What You Need To Know To Stay Safe

Understanding tornadoes and what to do before and during a storm is crucial to staying safe. This includes knowing when tornado season is, understanding the difference in tornado watches and warnings, and utilizing your own backyard weather station. This will help keep you ahead of fast-changing conditions during severe weather events.

What Is a Tornado?

A tornado, or twister, is a violently rotating column of air in contact with the ground that is produced by a thunderstorm. Tornado wind speeds can range from 70 mph to over 200 mph while causing damage to homes, buildings, and cities. According to NOAA, the average tornado count in the U.S. is about 1,250 twisters per year. The U.S. gets more than 80% of the world’s tornadoes!

When and Where is Tornado Season?

Tornadoes may form at any time, day or night, and during any time of year, but they tend to concentrate when the atmospheric energy is highest, also known as “tornado season.”

When Do Most Tornadoes Form?

Where Do Most Tornadoes Form?

Tornadoes occur in every state, but most of them happen east of the Rocky Mountains; it’s here that warm and moisture-laden Gulf air feeds into developing storm systems. “Tornado Alley” is the name given to areas where tornadoes are more frequent; one of these runs from Texas to Nebraska. There’s another sector of America with high tornado counts that is considered Tornado Alley Number 2. This region covers Louisiana, Arkansas, Tennessee, Mississippi, and Alabama.

Weather alerts may become confusing, especially if several different threats (like floods, tornadoes, and hail) are all happening at once. It’s important to understand the difference between a Tornado Watch and a Tornado Warning. 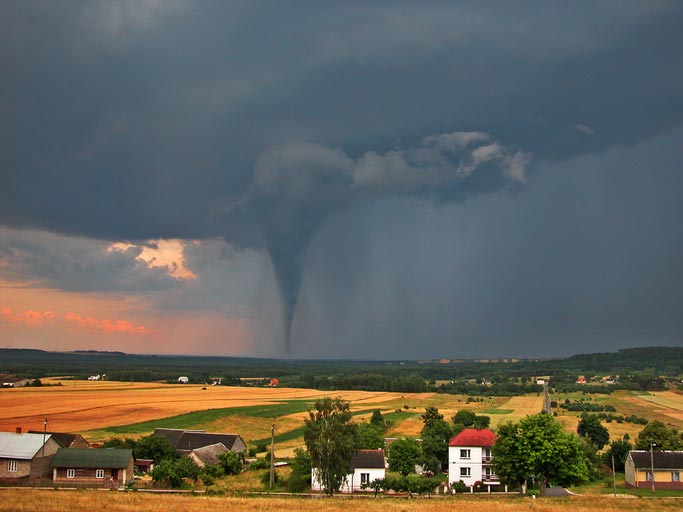 How To Prepare for a Tornado

Survey your property to determine the safest place for everyone to hide from an imminent tornado.

How To Spot Tornadoes on Stormy Days

It’s vital to keep an “eye on the sky” to stay informed when tornado watches are issued for your area. Conditions can change rapidly and you need to be ready.

Two of the best tools in your storm safety arsenal are your own eyeballs and a cell phone. Note how the sky is changing; it can tell you a lot. A low, rotating cloud is a sign of great potential danger; it may be a wall cloud. What does the radar show on your favorite app? For instance, are the storms three hours away or 30 minutes away?

Have Two Sources of Information

Cell towers will sometimes go down during a storm due to power failures, so have a second source for weather information like a NOAA weather radio or a battery-powered TV or car radio.

AcuRite home weather stations offer quality, affordable choices that can give you an edge during severe weather. These advantages may include:

Tornadoes are terrible things, but being properly ready can significantly improve your chances of survival. Identify your shelter zones before tornado season starts, have a simple disaster kit in place, and stay weather-aware. Consider a home weather station as a bonus safety tool in your storm-ready arsenal.

Steve LaNore is a Certified Broadcast Meteorologist with more than 30 years of forecasting and technical experience. He has provided meteorological consulting for everything from insurance adjusters to court cases and is a nine-time award winning author and broadcaster. LaNore has authored two books available on Amazon. He resides in north Texas near beautiful Lake Texoma.
May 13, 2021