What Causes Droughts and How To Weather One

What Causes Droughts and How To Weather One

Water is one of the essential elements for life. It's no wonder that droughts have been described as "creeping natural disasters" that can cause so much distraction and havoc. In fact, the United Nations Food and Agricultural Organization (FAO) reports that droughts have affected more people globally in the last four decades than any other type of natural hazard.

Here's what we know about what causes droughts, and how you can reduce their effects on your home and family.

Droughts are prolonged periods of abnormally low rainfall, leading to a shortage of water. However, as Drought.gov notes, defining the word drought can be exceptionally tricky. It's not always easy to determine when an area is experiencing a drought because it depends on an area's specific weather patterns and climate. The island of Bali may define drought as "a period of six days without rain" – a situation that would be perfectly normal in, say, the Sonoran Desert in Arizona.

The second part of the definition — leading to a shortage of water — is also not as simple to define because a shortage may also look different depending on the necessity of water in the affected area. These differences in climate and regional water needs has led meteorologists, hydrologists, geologists, climatologists, and other land management professionals to categorize drought into five primary types:

Where Do Droughts Happen in the U.S.?

While droughts can happen anywhere, some parts of the U.S. are more prone to suffer from drought conditions than others. Droughts are most common across the West Coast and Southwest and many areas of the Midwest. Nevada and Arizona, two of the country's driest states, are affected by drought most often. The Great Lakes states and the Northeast are the least likely to experience persistent droughts.

Identifying what causes a drought is just as complex as trying to define it. However, we can outline a combination of both natural and human factors.

Changes in Ocean and Land Temperature

Ocean temperatures have a major effect on precipitation patterns. Researchers have found a correlation between ocean surface temperature changes and droughts in North America and around the Mediterranean.

Air movements are one of the factors that contribute to when and where rain falls. When air and land temperatures cause a shift in ocean currents, it can result in unusually wet weather in one place and dry conditions in another.

Soil moisture contributes to the formation of rain clouds. When the soil is unusually dry, it can't return enough moisture into the air, interrupting the water cycle. Many factors contribute to the ability of the soil to retain moisture, including reduced soil quality as a result of deforestation, intensive farming, and other harmful land use practices.

Increases in population, changes in irrigation practices, and other such factors can create a situation where the demand for water is greater than the supply. Scientists have estimated that human water consumption alone led to a 26% increase in droughts worldwide.

While droughts are a natural part of the global weather cycle, it's clear that human actions contribute to and exacerbate their occurrence, leading to more frequent and more extreme weather events of all kinds. 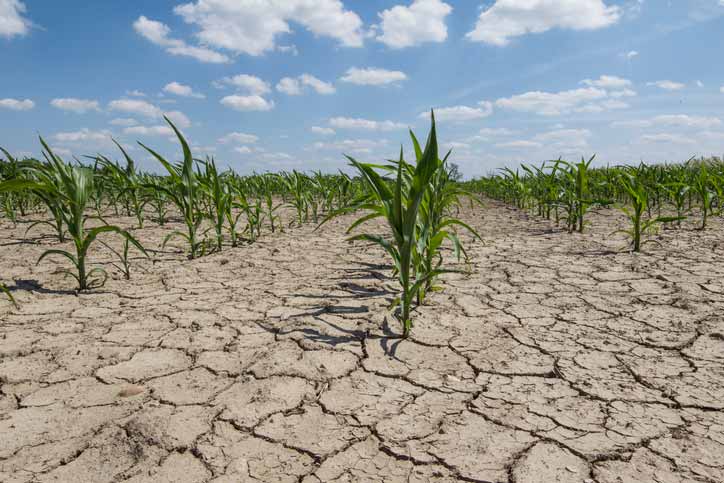 What Are the Impacts of Drought?

Some of the effects of drought are obvious — crop failures, for example. While other effects might not come to mind as quickly when you think about the consequences of a drought, they're important to know and consider when preparing for and living through a period of drought. Some of these less evident impacts include:

How To Protect Your Home and Family from Droughts

If your area is in a drought, your local officials will likely announce policies to help conserve water and reduce some of the other hazards associated with drought. They may include restrictions on watering your garden and lawn, prohibiting outdoor fires, and restricting outdoor activities. In addition to abiding by those restrictions, there are some actions you can take to protect your home, garden, and family in the case of drought.

Want to add to the scientific knowledge about droughts and their causes? Check out the About Us page at the U.S. Drought Monitor for suggestions on how you can be part of the conversation and instructions on submitting your own data and observations. Contribute in the comments section below as well by sharing your stories and ideas about your experiences with managing droughts.