Northern California saw more significant rainfall in December, along with temperatures that steadily declined. This combination allowed for record snowfall totals across the Sierra Nevada Mountain Range and high-elevations throughout the West Coast.

The National Weather Service reports below show many locations across Northern California reported record rainfall totals on December 13, when another potent atmospheric river event brought more abundant moisture onshore from the Pacific Ocean. Rainfall totals on that day surpassed 1 inch in many areas, with an impressive 3.39 inches reported at Oakland Airport and 2.51 inches reported at Sacramento Executive Airport, breaking their 2002 records! 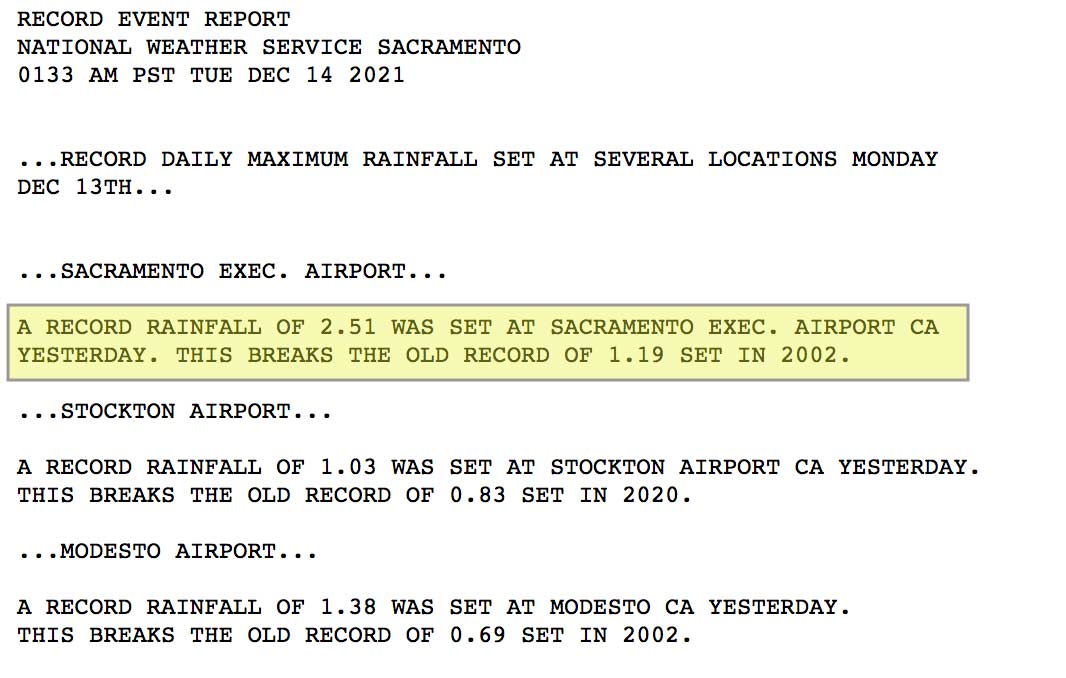 Meanwhile, daytime high temperatures gradually dropped throughout the month, but not before many San Francisco Bay Area locations reported record high temperatures on December 1. The NWS report below shows that some of these exceed the all-time December records, specifically for Salinas and Gilroy. 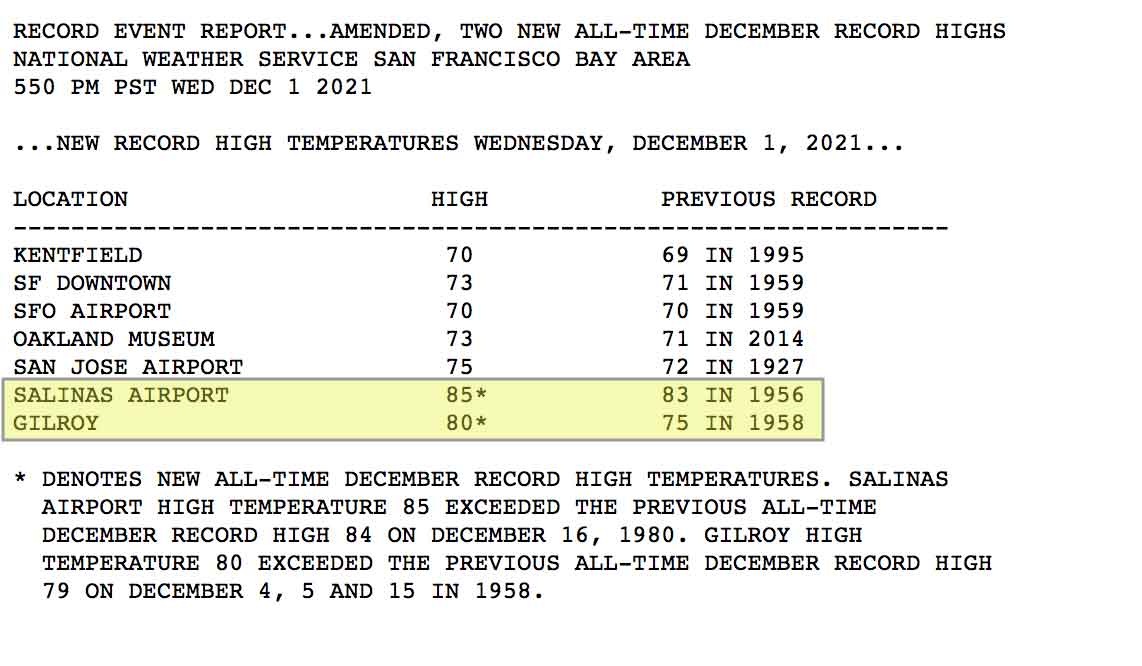 My AcuRite Atlas® home weather station captured this gradual temperature decline by also reporting the month's high temperature on December 1 at 70 °F (21.1 °C). After that, the temperature graph in My AcuRite® shows daytime high temperatures rarely broke 60 °F (15.5 °C) throughout the rest of the month. The intense winter storms that brought heavy rainfall to the region in the middle of the month clearly created additional active weather for many areas. With lightning strikes reported as the system approached on December 12, maximum sustained winds reaching up to 32 mph on December 15, and a storm total of 3.01 inches of rain from December 12-16, this was an extremely active winter weather event. While this December rainfall total of 6.14 inches bests the unprecedented October 2021 monthly rainfall record, there wasn't a day in December that broke the record daily rainfall total of 3.99 inches on October 24. 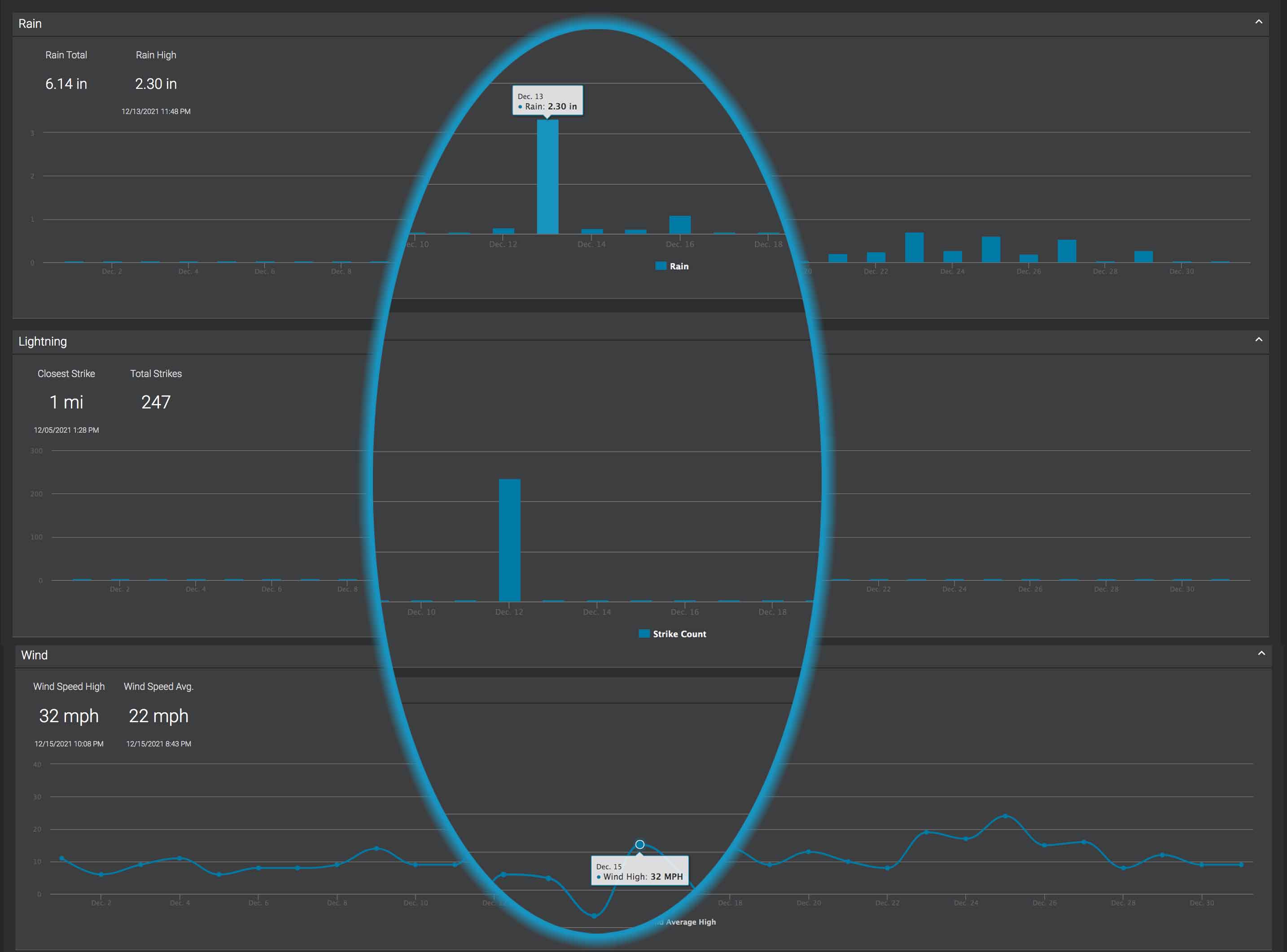 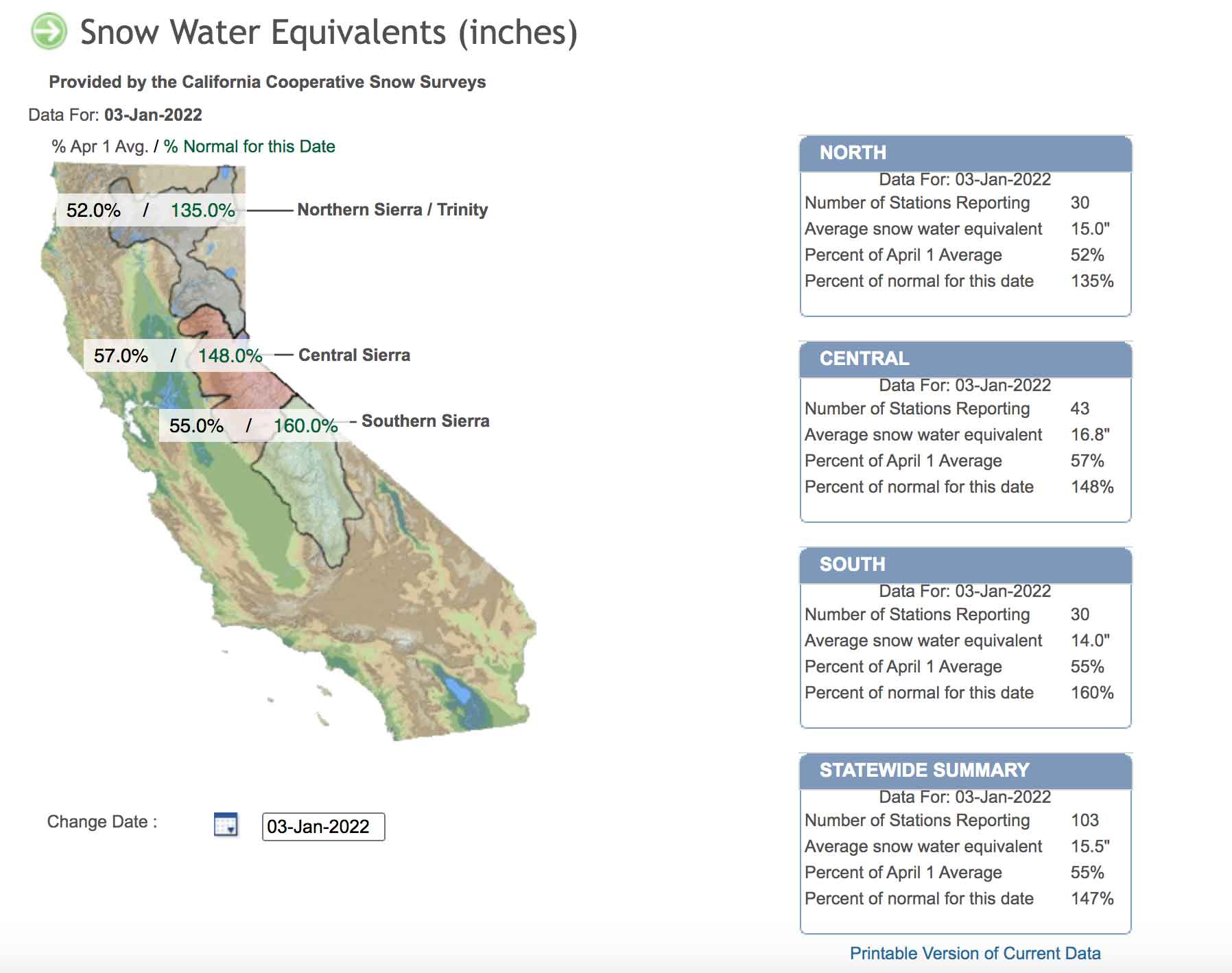 These December winter storms pushed the California state snowpack well above normal for January, with most locations reporting over 100% and a statewide average of 147% as of January 3, 2022. The national drought monitor also reflects this West Coast precipitation with substantially improved drought conditions across the region. By comparing the last week in December to the last week in November, we can see significantly improved conditions! Specifically looking at areas under Extreme and Exceptional Drought, we've had a combined improvement of 7.19% in December alone! 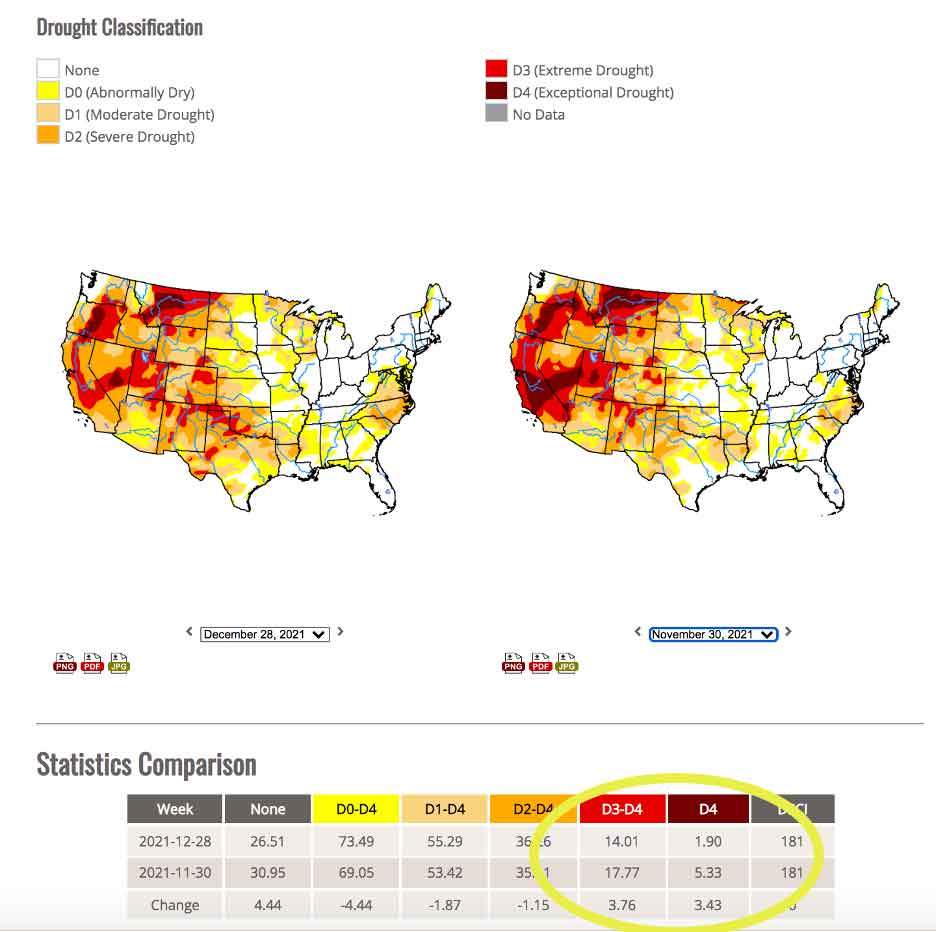 While the West Coast received one of its wettest Decembers on record, unusual weather also occurred throughout the rest of the nation. From the deadly tornadoes in the Midwest December 10-11 and again December 15 to December wildfires in Colorado, these unseasonable weather conditions are starting to become the norm. Please remember to stay updated with your local NWS offices and heed the advice of the local experts on severe weather dangers – even if it seems like the wrong time of year!

Report on the extreme temperatures, heavy rainfall, or strong winds your weather station received throughout December. Is there anyone that received more rain than my backyard weather station? What were your monthly rainfall totals or maximum temperatures? Share and discuss your local weather data and weather stories below!

Comments
Patrick H Murphy
I live in Boulder, Colorado. During the high winds and destructive fires I noticed a flaw between the instantaneous wind speed and the recorded wind speed. Since the data are recorded at time intervals, the recorded max wind was 55 even though there were multiple gusts that registered 65 on the station. I think an improved software would increase the frequency of recording data with increased wind speed.
Reply